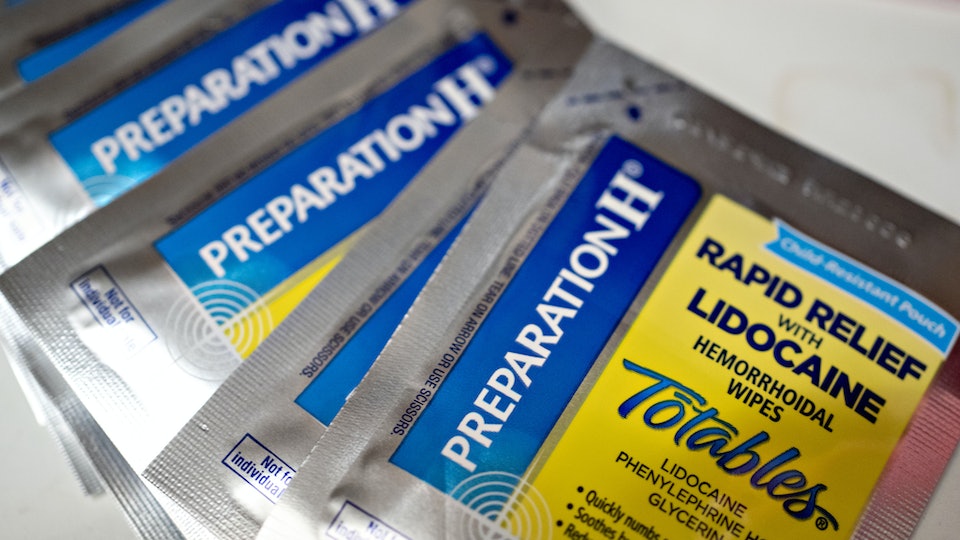 Of all the uncomfortable things that happen to your body when you’re pregnant — hair in new places, peeing when you sneeze — hemorrhoids just may be the biggest pain… in the butt. If you’re looking for a quick fix to relieve the itching and swelling associated with hemorrhoids, you may be tempted to reach for an over-the-counter topical cream, but is preparation H safe to use during pregnancy?

The main ingredient in Preparation H is phenylephrine, “which causes temporary vasoconstriction or narrowing of the blood vessels in the affected area,” Dr. Talitha L. Bruney, OB-GYN and medical director of Department of Obstetrics & Gynecology and Women’s Health at Montefiore Health System tells Romper. “Preparation H also has ingredients which help relieve some of the itching. Since this medication is locally applied, the amount absorbed into the body is low and hence, less likely to affect the growing pregnancy.” Simply stated, Bruney says that, “Preparation H is safe in pregnancy.”

Hemorrhoids are swollen veins in and around the anus (it makes my stomach to lurch to think about, but friends, the body is a beautiful, mysterious, and sometimes freaky place). They’re caused by “the pooling of venous blood by the anus which can cause swelling, itching, and bleeding with bowel movements,” Dr. Catherine Goodstein, OB-GYN at Carnegie Hill, tells Romper.

The topic of things growing in your butt can be embarrassing to talk about. I know because before the days of Amazon and self-checkout, I used to buy Preparation H as a remedy for under eye bags (which, according to Self really isn’t a good idea) and every time I’d tell the cashier, who definitely didn’t ask, “… this is for my eyes.” Then I’d jam the cream into my own purse lest anyone see the packaging through the plastic store bag. The point is that while talking about hemorrhoids and their remedies may seem uncomfortable, the swollen veins are actually super common and you can find relief.

As many as 50 percent of pregnant women experience hemorrhoids, according to the US Department of Health and Human Services. This happens for several reasons; for example, “the larger pregnant uterus can hinder blood flow back to the heart, and the hormones of pregnancy can further weaken the ability of veins to circulate blood,” Goodstein says. Pregnant women are also more likely to be constipated, which can worsen hemorrhoids, per Healthline, and added pressure on the veins around the anus (from the baby) may also contribute to their growth.

The Preparation H website actually has a whole page called “Just For Moms” which is devoted to explaining why hemorrhoids happen during pregnancy and how their product can help. The cream contains small amounts of hydrocortisone, which is a steroid that can help alleviate some of the swelling and itching that occurs with hemorrhoids. “Over the counter topical steroid preparations are much lower potency than prescription steroid preparations, and in most cases I will allow a trial of one week of Preparation H to see if there is any improvement,” Goodstein says. If the situation doesn’t improve, she recommends seeing a proctologist.

In an ideal world, you’d to stop hemorrhoids before they form, but “you may not be able to prevent them completely, as they are frequently caused due to the body’s natural response to pregnancy,” Bruney tells Romper. “Constipation makes the symptoms worse. Therefore, having a diet high in fiber (20-30 grams daily) is helpful and keeping well hydrated (1.5-2 liters water daily) is key in alleviating this problem… or reducing the symptoms.”

Goodstein also recommends increasing fiber, though she adds that she doesn’t usually recommend fiber alone in pregnancy “without also adding a stool softening agent such as Ducosate Sodium (also known as Colace). Softer stools will be less painful to pass.” She also recommends sitz baths with warm water (no need to add anything to the water) two or three times a day.

Preparation H is generally considered safe for pregnancy, but it’s always a good idea to run it past your obstetrician, especially if your symptoms aren’t improving or the hemorrhoids seems to be increasing in size. Your doctor may recommend other options for treatment, including witch hazel or medicated wipes, but rest assured that just because you’re pregnant doesn’t mean you have to grin and bear it when it comes to hemorrhoids (but you may just have to be okay with peeing a little when you laugh).