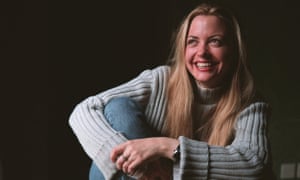 Iwas 18, and a sophomore in college, when Elizabeth Wurtzel’s Prozac Nation: Young and Depressed in America was published. It wasn’t really the kind of book I typically went for – I tended toward highly serious poetry and fiction, in my own way of coping with being a painfully self-conscious teenage girl – and I remember being a little taken aback at the casualness of her voice, her photo on the cover, the obvious self-marketing of it all. (Once again, I was 18, and sheltered.) But the book was good. It was carefully allusive and full of sharp details (cutting lines of cocaine on a Pogues CD; a tote bag of bloodied clothes). The voice on the page was smart, swerving, prickly, sometimes coy and self-aggrandizing, but undismissable. It practically bolted off the page, so inhabited, so present was it in every sentence. It was there even in what is typically a perfunctory author’s note explaining that names have been changed; Wurtzel added: “Otherwise, unfortunately for me, every detail is accurate.”

Opening the book by portraying herself curled up at a party crying while people looked on, a little bit annoyed by her latest outburst, Wurtzel unsparingly outed herself as a sometimes-out-of-control person – a “rock and roll girl who has violated her body with a tattoo and a nose ring,” a girl her loving mother had given up on – suffering from almost unrelenting depression. It may be hard to believe now, but this was, in the moment, a radical thing to do. In doing so, it helped open the door for scores of young writers to disclose in literary memoirs, without the screen of fiction, what once would have seemed taboo.

From today’s vantage, her self-conscious, performative, complex persona, her willingness to mine her own life for material, especially messy material, looks … well, like what writers of autobiographical nonfiction often do. But in part that’s because she did it, and did it well. Without Prozac Nation as a model before them, so many writers – me among them – might not have gone on to write memoirs about periods of difficulty.

In 1994, I didn’t know that a young woman could write like this, with a voice that was brash and unapologetically honest – both glamorizing and pragmatically humane. Because Wurtzel was a good writer, she mythologized her life with immersive intensity: when we first meet her in the book, she’s in a puddle of black skirt on a white tile floor; later she describes her first suicide attempt, as an 11-year-old at summer camp, as the product of her recognition that she couldn’t be like the other girls applying blue eye shadow as they “poured themselves into Sasson jeans and covered up with quilted satin jackets in pink and purple.” (Sasson jeans!) She was jaded and hardboiled, which made her alluring, but also desperately sad, intense, needy, unrelenting – all of which she knew, and let the reader know she knew.

It was this combination of factors – the very thing that led some critics to hate the book (“a coy bid for public attention”) – that was the source of its power: she started a dialogue about mental illness because she allowed all the challenging complexity of her suffering to come through.

This was the thing about Prozac Nation: it didn’t just popularize a new genre of memoir. It also, in combination with books like William Styron’s Darkness Visible and Peter Kramer’s Listening to Prozac, helped change how Americans viewed – and talked about – mental illness, transforming depression from a silent, stigmatized affliction to a mainstream condition that could affect anyone.

Wurtzel helped normalize depression, just as the frank, hilarious friend you meet in high school, or in college, or as a new mother, helps normalize all the things you are scared to say out loud or even acknowledge to yourself.

It’s hard to overstate how much this altered the popular consciousness, especially for young people. In 1994, I barely knew you could talk about depression and mental illness. I had a boyfriend who had tried to commit suicide before I met him, a boyfriend who confided in me that he took Prozac, a fact I treated with tender protectiveness, worrying over him in the dark reaches of the night when I woke and he was far away. It was a fact I wouldn’t have freely shared, even anonymously, because I didn’t know anyone else on antidepressants.

Now mental illness – depression in particular – is part of our lingua franca. Wurtzel’s memoir helped accomplish this. At the time, though, I remember there was a feeling in the air, among some of the young writers I knew, that her book was not quite serious. That by adopting a slightly theatrical attitude toward herself and by revealing so much (“luridly intimate,” one reviewer wrote), she was cheapening something or making easy what was supposed to be hard to share – or, perhaps, more palatably packaged. After all, she wrote with what almost felt like glee (because her voice is so infectious) about the sex and drug binges, the masochism, the despair, the inability to stop herself.

The irony is that from today all this looks prescient; as a writer, she was in possession of the wit, the theatrical habit for self-revelation that has become a hallmark of being a social media persona. (“I was a hashtag before there was Twitter,” she wrote in The Cut in 2018.) Interestingly, she also identified the dangers of the medical system’s casual overprescribing of SSRIs without understanding enough about how they worked. But perhaps what’s most striking about rereading Prozac Nation today is that the book is not nearly as “cynical” or “disaffected” in that characteristic Gen X way as I had remembered it. Rather, it’s intensely earnest – perhaps a better word is committed – just below the hardboiled façade.

Prozac Nation told readers that their experiences had meaning; that even if you were in your 20s, having lived through something painful might be important, and might be a story you could spin into something useful for other people without transforming it into something controlled and removed. Wurtzel knew that a voice on the page could be like a voice in your ear, and all the more powerful for that.

… we’re asking readers, like you, to make a new year contribution in support of the Guardian’s open, independent journalism. This has been a turbulent decade across the world – protest, populism, mass migration and the escalating climate crisis. The Guardian has been in every corner of the globe, reporting with tenacity, rigour and authority on the most critical events of our lifetimes. At a time when factual information is both scarcer and more essential than ever, we believe that each of us deserves access to accurate reporting with integrity at its heart.

You’ve read 122 articles in the last four months. More people than ever before are reading and supporting our journalism, in more than 180 countries around the world. And this is only possible because we made a different choice: to keep our reporting open for all, regardless of where they live or what they can afford to pay.

We have upheld our editorial independence in the face of the disintegration of traditional media – with social platforms giving rise to misinformation, the seemingly unstoppable rise of big tech and independent voices being squashed by commercial ownership. The Guardian’s independence means we can set our own agenda and voice our own opinions. Our journalism is free from commercial and political bias – never influenced by billionaire owners or shareholders. This makes us different. It means we can challenge the powerful without fear and give a voice to those less heard.

None of this would have been attainable without our readers’ generosity – your financial support has meant we can keep investigating, disentangling and interrogating. It has protected our independence, which has never been so critical. We are so grateful.

As we enter a new decade, we need your support so we can keep delivering quality journalism that’s open and independent. And that is here for the long term. Every reader contribution, however big or small, is so valuable.