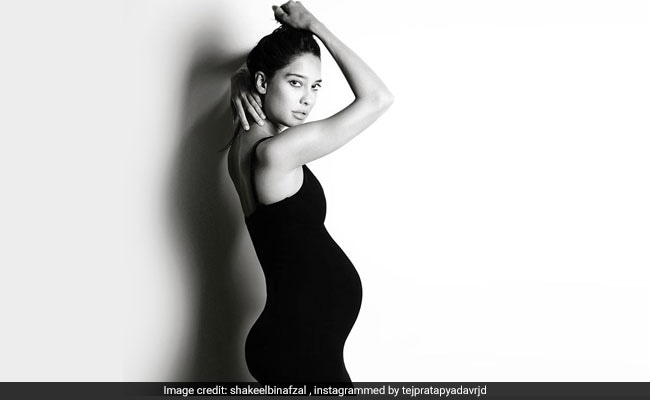 Actress-model Lisa Haydon, who recently announced her second pregnancy with husband Dino Lalvani, shared a pregnancy update on Instagram. Sharing a black and white shot of herself in a sleek black body-con dress, that silhouettes her gorgeous baby bump, the Queen actress wrote that she is currently in her second trimester: “#19weekspregnant.” Lisa Haydon, who has always set major fitness goals, looks absolutely stunning clicks from her photoshoot, a glimpse of which is her Instagram post. Lisa Haydon and entrepreneur Dino Lalvani married a dreamy beach wedding in 2016 and they welcomed their first child Zack together in the year 2017. The 33-year-old actress often fills up her Instagram with cute posts featuring her two-year-old son.

Earlier this month, Lisa Haydon made the pregnancy announcement with an adorable post: “Party of four on the way,” she wrote.

After announcing her second pregnancy, Lisa Haydon told news agency PTI at an interview that she hopes to return to films after the birth of her second child: “After this one (child), I feel like I’ve given my children each other and I don’t mind taking a break and you know, doing a bit of work. Hopefully, my baby making phase might come to a pause for a few years. And yes, then hopefully you’ll see me in the movies.”

On the work front, Lisa Haydon was last seen in Ae Dil Hai Mushkil and also has films like Housefull 3, The ShaukeensandQueento her credit. Lisa Haydon has also been part of reality TV showIndia’s Next Top Modeland web-seriesThe Trip.