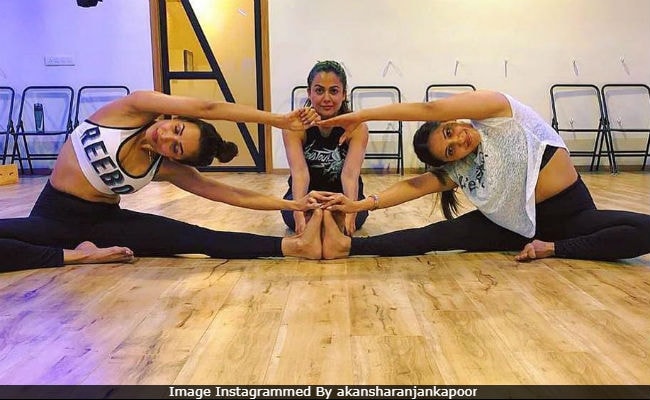 While we were busy with work on Monday,Malaika Arora, a fitness enthusiast and a Yoga expert, shared a motivating photo of herself from her workout studio The Diva Yoga. Malaika was joined by her sister Amrita and friend Akansha Ranjan Kapoor. In the picture, the trio can be seen doing the basic stretches. “The sisterhood of the yoga pants,” read the caption of their picture, which was initially shared by Akansha Ranjan Kapoor. In another set of pictures from ‘Malaika’s Monday motivation’ album, she shared a picture of herself ‘trying to ace some backbends.’ “Goals” and “superb” are some of the comments on the posts. Malaika’s workout studio The Diva Yoga is in collaboration between her and Yoga enthusiast Sarvesh Shashi.

A glimpse of how much of a fitness freak Malaika Arora is.

Last week, Malaika was joined by actress Sara Ali Khan at the Pilates class. “Sara and Malaika killing it and giving us some serious Monday motivation,” read the caption of the video posted by celebrity fitness instructor Namrata Purohit.