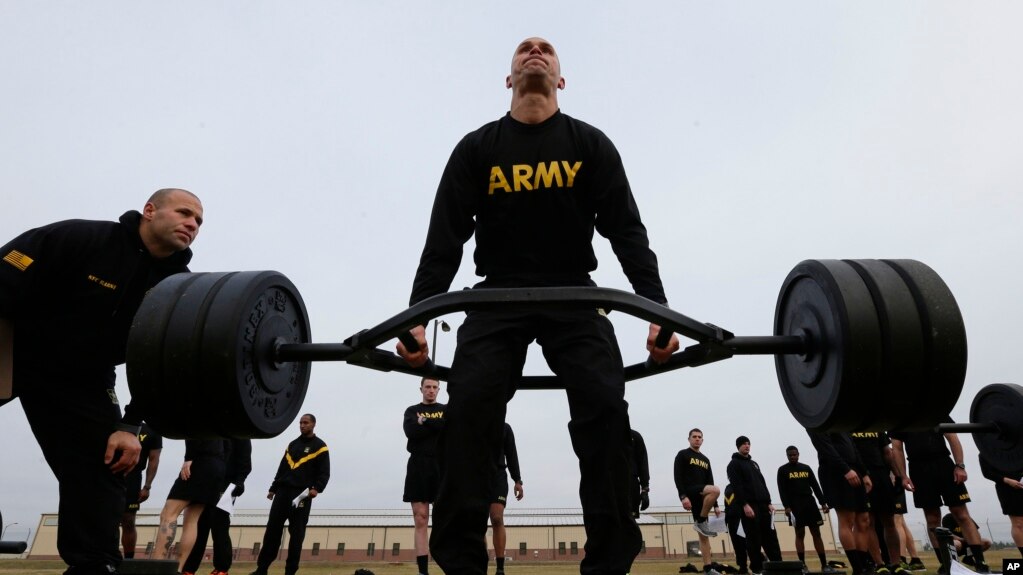 The United States Army has developed a new physical fitness test that aims to prepare soldiers for real-life combat situations.

The Army’s current physical fitness test covers three main activities: sit-ups, push-ups and a 3.2-kilometer run. It has to be completed in two hours.

The new test will include six events to complete in 50 minutes. The exam adds more difficult and complex exercises, including a strength dead lift, standing power throw and “drag and carry.”

The new test comes after many Army commanders expressed concerns in recent years that new soldiers are not physically fit. A public opinion study last year looked into the situation. It found almost half of commanders questioned said that newly arriving soldiers could not meet the physical demands of combat.

Army officials have also said about 12 percent of soldiers at any one time cannot deploy to combat areas because of injuries.

General Stephen Townsend is head of U.S. Army Training and Doctrine Command. He told the Associated Press that many top officials have long thought that the existing fitness test does not effectively measure the physical qualities needed for battle.

Townsend said the new test “may be harder, but it is necessary.”

For many, meeting the new fitness levels will be difficult. The old test rated soldiers differently based on their age and gender. The new one will be far more physically demanding and will not consider age or sex.

Townsend said the new test was designed based on scientific research that attempts to link exercises to actual combat activities. Such things could include running away from fire, carrying a wounded soldier or carrying heavy equipment.

The scoring is divided into three levels that require soldiers with more physically demanding jobs to score higher.

Sergeant Major Harold Sampson told the AP he does not have a physically demanding job. As a military intelligence specialist stationed at Fort Bragg, North Carolina, he spends a lot of time sitting inside an office.

He expressed concerns about being fit enough to pass the new test. After attending a preparation exercise two days before he was to take the test, Sampson said he felt prepared to be “embarrassed.”

Army Major General Malcolm Frost is commander of the Army’s Center for Initial Military Training. He was in charge of developing the new fitness test. “We needed to change the culture of fitness in the United States Army,” Frost said. “The goal is about having a more combat-ready army,” he added.

Frost said a major problem has been that about one-third of soldiers entering the service leave before their third year. Many do so because of muscular or skeletal injuries. The new test, he said, will help identify those who are less physically fit or lack the necessary mental discipline.

The new test will clearly add difficulty for officers like Harold Sampson and others with non-physical jobs. “It breaks the mindset of ‘I am an intel soldier,’” Sampson said. “It changes it to ‘I am a soldier,’ because bullets on the battlefield don’t discriminate.”